For a campus that's consistently ranked among the most beautiful in the country, how can we possibly narrow down the list to the top 10? You're right, we can't. So here are 10 gorgeous spots on campus that run the gamut from well-known favorites to hidden gems, but we know it's not exhaustive. Please share your memories and other favorites in the comments!

From the outside, the IU Auditorium looks like a nice limestone building. When you walk inside, however, you would think you're in an auditorium in a big city -- high ceilings, classic art, and an all-around lavish space. IU Auditorium holds around 3,000 people and hosts off-Broadway productions, concerts, comedians, and talks with notable celebrities. 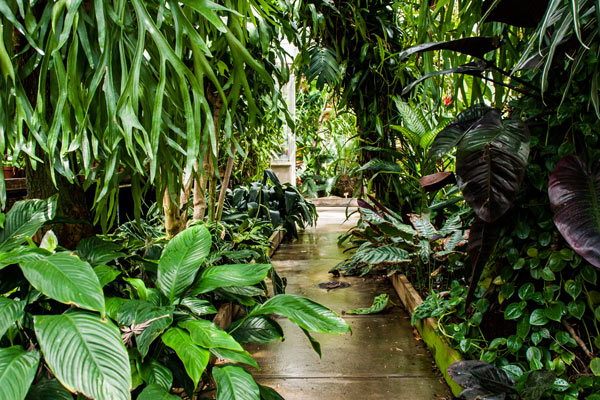 It's probably one of those buildings you've passed a thousand times before, but next time you're nearby, swing in for a stroll (and be prepared for the heat). 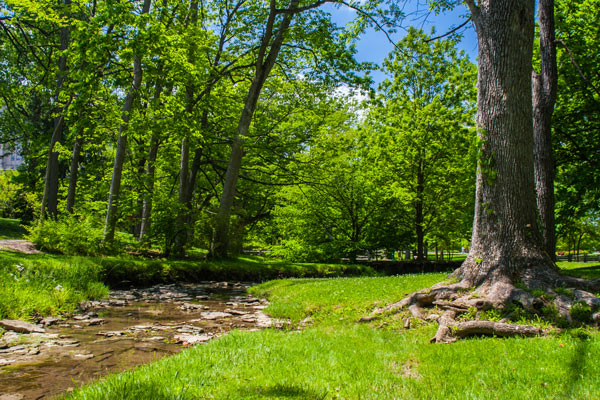 This pretty little creek cuts through campus, running by the Indiana Memorial Union and Dunn Meadow and beyond. It's the perfect place to sit and rest, practice your drawing skills, or creek stomp like a carefree kid.

The MAC holds over a thousand shows a year which gives you a thousand reasons to get dressed in your best and experience a show. While there are shows that travel to town, most of the performances are by students in the Jacobs School of Music. The IU Musical Arts Center is a sight to behold any day of the week.

Part of the beauty of Simon Skjodt Assembly Hall is the tradition and spirit in the stadium during every game. It also doesn't hurt that the lobbies have been renovated and filled Hoosier memorabilia. Before you walk into the south lobby, you're reminded of the five NCAA championships. Then inside, it's all cream and crimson. There are trophy cases, interactive screens, old scoreboards, and "INDIANA" written overhead.

The Indiana Memorial Union is the second largest student union in the country and the most beautiful in the world (in our unbiased opinion). The limestone building can easily be mistaken for Hogwarts with all the magic found inside. There is a bowling alley, billiards hall, movie theater, hair salon, bookstore, and many restaurants and cafes (including one of the largest Starbucks in the country). Oh, and there's a hotel.

When you walk through the arboretum you start to feel like you're in a movie. Once almost a parking lot, the perfectly manicured space, located in the middle of campus, is landscaped with Indiana-native trees, a pond, and of course a classic tall red clock. The arboretum was made by students for students, literally. Rumor has it that former IU president Herman B Wells decided to wait for students to walk their own paths before laying down the sidewalk. So while the walkways may seem odd, it is the most efficient way to walk to and from classes.

Named because it is the oldest part of campus and crescent-shaped, the Old Crescent is one of the most beautiful spots on campus. Although it is on the far west side of campus, it is located near many key locations. The Old Crescent is in eyeshot of the Sample Gates and downtown Bloomington, a five-minute walk to the IMU, and a ten-minute walk to 3rd Street. You could spend hours people watching, having a talk with Herman B Wells, or sitting underneath the Rose Well House.
Fun Fact: IU has all Indiana limestone buildings except for two red brick buildings found in the Old Crescent. Our rival to the north, Purdue University has all red brick buildings except for two Indiana limestone buildings. The buildings at both universities are called Owen and Wylie Hall.

No matter the season, the Fine Arts Plaza is a must-see. The circle drive is dedicated to the arts. There is the Fine Arts Building, Grunwald Gallery of Art, and Eskenazi Museum of Art and that's only on one side! Lilly Library, Lee Norvelle Theatre and Drama Center, IU Auditorium, and IU Cinema finish the Fine Arts Plaza. Then, of course, you have Showalter Fountain. The fountain was built in 1961, however, one of the fish in the fountain is newer than the rest. After IU won the NCAA Championship in 1987, one of the fish was taken and never returned. Now, during big games or high-risk events, the fish are removed.

Behind the IU trident, the Sample Gates are the most recognized part of the university. They are truly the connection between IU and the city of Bloomington. The limestone gates welcome students to Indiana University's beautiful campus making it a perfect place to take a picture while at a campus visit or when they commit to IU. It is also a popular place to take graduation photos as it signifies students leaving the university.

Memorial Stadium has received some renovations including a finished bowl! The updated look is why this football stadium gets an honorable mention.

While everyone is gone, enjoy this peaceful image of Luddy Hall. 🌃🌘😍 #iu #indianauniversity #peaceful #serenity

Luddy Hall is the new home of the School of Informatics, Computing, and Engineering is the newest building on IU's campus. Enjoy the sunlight beaming through while playing with the new technology or eating at the delicious cafe.

There's only two weeks left until Thanksgiving break! Let us know in the comments where you'll be spending your vacation! #globallyready

Home to the Hamilton Lugar School of Global and International Studies gives you a global feel inside and out. The exterior has imported limestone from countries IU offers a foreign language and the interior resembles a newsroom broadcasting international news in the lobby.

The beauty of Indiana University is breathtaking, often cited as one of the most beautiful in the country.

It's not just for students. Get event info and tips on how to enjoy the greatest college weekend.

Looking to sit with other Hoosiers to watch the big game? Check out one of these places!

Find the perfect hotel near campus.

Let us help you plan your trip. Request the 2020 Visitors Guide to Bloomington.

Nia is Visit Bloomington’s Content Coordinator. She is a proud Chicago native, but after attending IU, she has yet to leave Bloomington. Her favorite thing about B-Town is the diversity and culture that is found in this small town in the Midwest.  She enjoys exploring new places around town and cheering on the Hoosiers. It’s her goal to try every ethnic restaurant in Bloomington by the end of 2019.